When my desk-mate Lucy told me about some bacon jam she bought from a butcher on her holidays, I was like Peter Kay when his dad first heard about garlic bread.  Garlic?  Bread?  Garlic Bread?

The stuff she bought was made from loads of bacon, sugar, vinegar and bourbon.  I was salivating at my computer at the idea of it, and then I thought, why not replace the bourbon with beer and make beer bacon jam?  I was well chuffed with myself at the idea of inventing a new product.

As I’d never eaten bacon jam, I added this to my Ocado order and started researching… 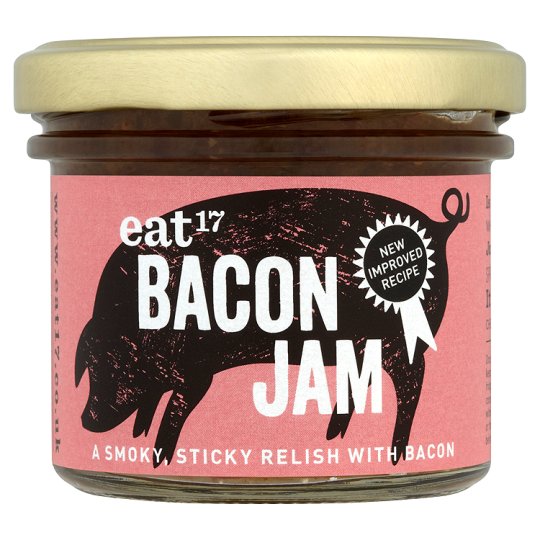 But a quick trawl around the interwebs revealed that I was not the first to have thought of making bacon jam with beer, the awesome Beeroness (my favourite beer blogger) had already been there and done that.  So I based my recipe on hers, with a bit of tweaking to the method, an anglisization of the measurements and a change in the amount of beer.  If you are a cups measurement type, here’s a link to original recipe at The Beeroness – warning, her site is extremely addictive.  I am a huge fan and I want to make every single thing on her blog…

I chose one of the brewery’s latest concoctions, Chicha Pale, which is made with Peruvian purple corn.

My thinking was as follows.  Corn?  Bacon? Corn and Bacon – yes!  Because I know for sure that this combination works, as it’s the foundation of Dick Powell’s corn chowder… 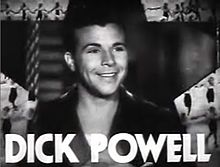 Here’s how I made it.  IT IS AMAZING.

Roughly chop the bacon and cook it in the biggest frying pan you have, I did mine in two batches.

When the bacon is cooked, and is beginning to get crispy, use a slotted spoon to fish it all out and put it into a big casserole dish or saucepan that has a lid.

If you have a lot of bacon grease, remove some from the frying pan, leaving about a tablespoon (I had about that from my bacon so left it all in).

Cook the onions in the bacon dripping for about 3 minutes until softened.  Add the crushed garlic and cook for around 30 seconds.

Add the bottle of beer and both vinegars, scraping your pan to gather up any super crispy bits of bacon.

Add the brown sugar and bacon, reduce the heat to a simmer.

Place lid on your pan at an angle so that some steam can escape and cook the bacon mixture until it has reduced to a thick and syrupy consistency.  The Beeroness cooked hers for around 45 minutes, but as I’d added a bit more beer, mine took about another 20 minutes to get to the right sort of consistency.  I cooked it until there was hardly any liquid left.

Bung the whole lot in a food processor and blend until an even consistency.  The Beeroness adds an extra 1/4 cup of beer at this stage, but I didn’t (basically, I FORGOT) and my bacon jam was a nice spreading consistency.

I had LOTS of this on toast and it was addictively good.

This made 1 x 150 ml jar and 5 little B&B jars – I think they hold about 35 ml.  I will attempt to remember to work out for sure how many ml of jam this recipe makes and come back and record it.  But you’d get two or three smallish jam jars worth.

The lucky recipients of some bacon jam are:

3 – Lucy my desk-mate, as she introduced me to the concept 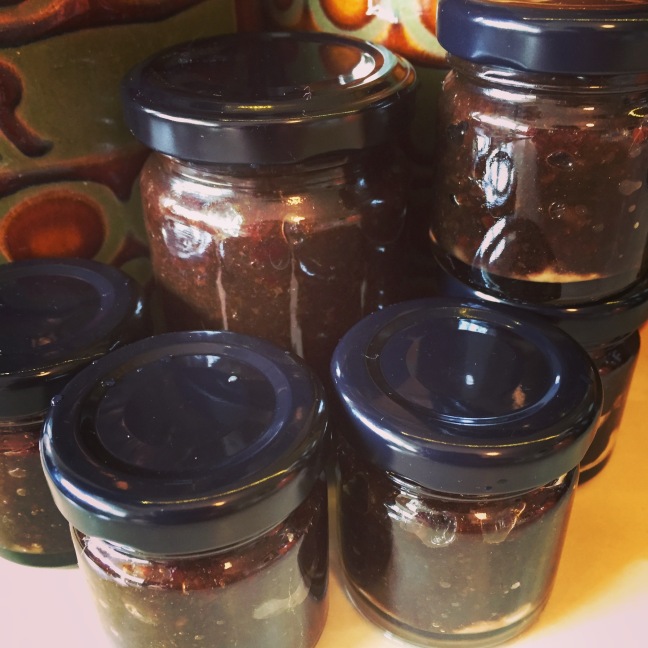